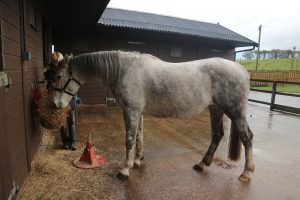 The mare had always been barefoot when she started to show abscess symptoms in December 2019. The affected leg was swollen to the knee and the horse was non weight bearing at that point. The vet dug open an exit path in the sole and the leg was poulticed; after 1.5 weeks the abscess burst naturally at the heel. 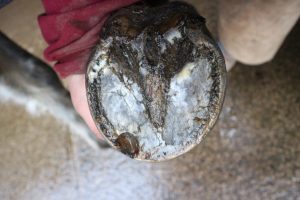 The EP first got involved in early January 2020; by then some lameness remained, but comfort levels were much better. On examining, it became apparent that the full sole had been underrun by the abscess and would shed fully at some point. The owner was informed of this, as it was going to be very likely that this process would start prior to the next appointment, so not to worry and get in touch if needed.  This is what it looked like when the original sole shed out. 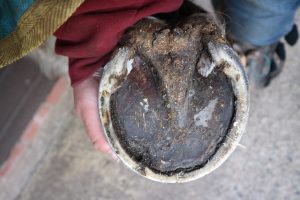 On the next visit in February, it became apparent that the abscess had taken another exit route, which was running at the coronary band from the medial quarter region to the middle of the toe. Only with this exit track, the mare finally became fully sound.

A couple of visits later (May) it became apparent that prior to this final exit track that burst in February, the abscess had still been ongoing and underrun the full sole for a second time. Nevertheless, the recovery was making good progress and the mare had stayed sound since February. 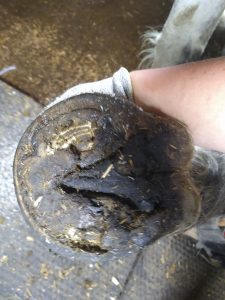 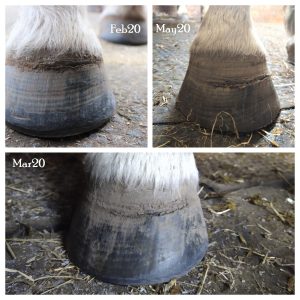 In June, the abscess exit track was getting close to the ground and the weakened hoof wall on the medial side was ready to break off. The decision was made to remove most of the weakly attached wall and remove pulling forces to ensure no further wall would break off. The mare was measured up for boots – the owner luckily had one of the correct size from one of her other horses – to use if the horse was being worked. The foot was ok to go out without a boot when being turned out. 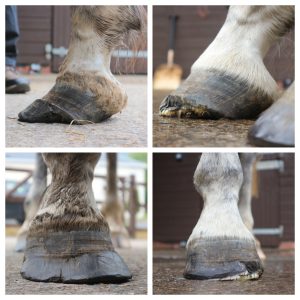 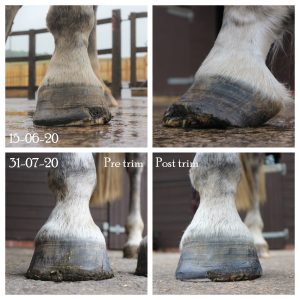 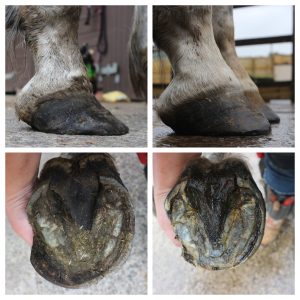 From here on, the hoof grew out well without any problems, and the mare has remained sound and in work from February onwards. The only visible sign that now remains is a slight weakness in the white line attachment where the sole was originally dug out prior to the EP’s involvement. 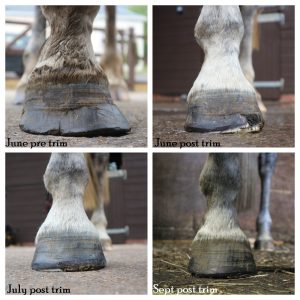 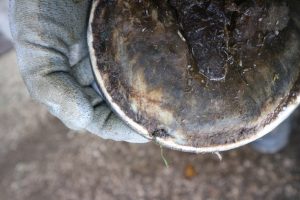 On a side note, the unloading of the affected limb for a period of time also had an effect on the other legs; there was some compensatory flaring and loading in the other legs that was corrected over time. 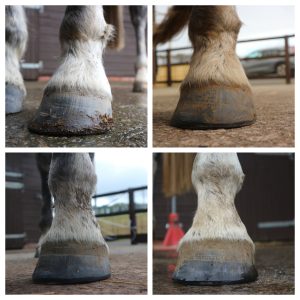 It’s unusual for an abscess to be this persistent and significant. Normally abscesses resolve quickly within 3-5 days.  If a horse under your care has an abscess which persists for longer, or causes swelling in the leg please call your vet for assistance.