This case study was very kindly submitted by Raffles owner.  Often equine podiatrist’s find that horses feet and comfort are being compromised by the horse’s excess weight; its very rare to find hoof issues caused by the horse being underweight. 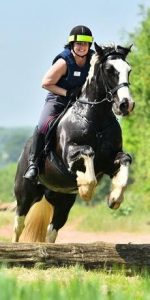 Successfully reducing a horse’s weight is not easy, and ‘being stuck’ can be a frustrating experience for all sides. So we’re delighted to share Ange’s story about how she helped her horse Raffles to a healthier weight;

“Raffles is a 14 year old, 14.1hh cob, who is broken to ride and drive.  I’ve owned him since he was 7.  His weight piled on quite quickly after moving from renting a field, to a livery yard in 2013.  The main causes were a reduction in movement due to being stabled overnight through the winter and the rich haylage he was fed.

I made some minor changes, such as using a slow feeder net for the first winter we were there, and then fully clipping with a no fill turnout rug the second year.  However, any loss over winter, was undone by the summer grazing and he was getting fatter with each passing summer.  We were doing a fair bit of hacking and going on fun rides, but it didn’t make any difference.  I tried different types of grazing muzzle, but he made no attempt to eat and I felt so sorry for him I gave up that idea.  Not only were his feet suffering with footiness and white line disease, but he was also having gut problems; he was sensitive to the touch near his hindgut, objecting when he was being girthed and producing cow pat poos. He was also quite lethargic. My vet thought the grass was too rich. I tried a number of different supplements for his gut and feet, but getting him to eat it was quite hit and miss. 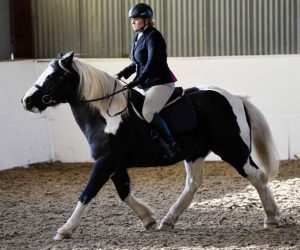 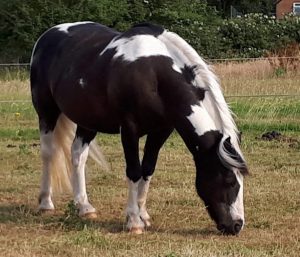 In 2016, we moved yards where he was fed hay in his stable and was turned out during the night through summer and in during the day through summer.   He was tipping the scales at 596 kg. Probably 100 g overweight. I hoped the diet of hay and being off the grass for 8 hours every day would be enough to reduce his weight, but it wasn’t.  I had to take action!

He was by this time on a number of supplements for feet, general health and gut, which he wasn’t enjoying and often didn’t eat. I spoke with Valley View Animal feeds, and removed all supplements, fed only 100 g of their Cococarob Fibre a day, a tablespoon of salt, a carrot or two and a handful of Thunderbrook chaff. He loved it!

He also became quite adept at making huge holes in his haynets, so I added a small holed net over his slow feeder.

I removed his rug completely and clipped under his neck and belly.   I upped the exercise to 6 days a week over winter, riding or lungeing and he lost 75kg. The winter was quite harsh that year and helped considerably. A very dry summer helped in only adding 15kg. The next winter was quite mild and he only lost 25kg. As his weight reduced, his feet improved, as did his gut issues.

By this time, his weight was far more acceptable, but he still had metabolic signs such as a huge cresty neck, residual fat pads and puffiness above the eye and I was still worried about the risk of laminitis and metabolic disease. I tried a muzzle again this time he took to it immediately! 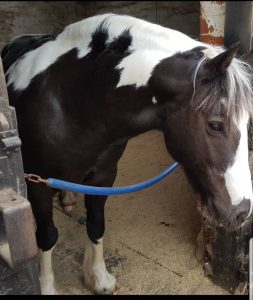 Raffles having lost weight from his torso, still has a significant crest on his neck

I began to soak his hay and contacted equine health specialists Trinity Consultants for advice. In October 2018, I started a course of L94, followed by Rexflo to try and shift the metabolic waste stored in his crest and fat pads. Results were quick to take effect, but then slowed. Following Trinity’s advice, in January 2019, used one pack of T Forte to boost the process and then changed back to Rexflo. In May 2019, I became involved in a trial of Cholex. Trinity had observed results of reduction in metabolic signs such as fat pads and crests in horses that were not particularly overweight and suggested I tried it. Slowly, but surely, his crest and fad pads melted away. He had a course of L94 in January 2020 which coincided with his winter wormer and had been on the Cholex ever since. He came out of this last mild winter slightly ribby, exactly where I wanted him to be. His crest is minimal and soft, his orbital cavities are no longer puffy and he has no fat pads. He is not girthy or footy, is enjoying his work and finding it so much easier!

He is currently living out (for the summer) and wearing a muzzle 24 hours a day. He is on lush grass which hasn’t been grazed in some time, but despite this, his ribs can still be felt. He will be in overnight in the winter and will remain muzzled when out and the grass is long enough for him to eat.

Weight can be gained so quickly, but is so difficult to address, especially without feeling guilty or bad for your horse. I regret faffing about trying one or two changes at a time, instead of taking drastic measures straight away and doing everything within my power to reduce the weight. I also believe that both his feet issues and gut issues were caused by his excessive weight, his lethargy certainly was. I now have a much happier and healthier horse.” 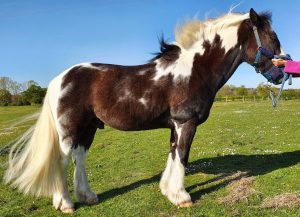 Raffles at a much healthier weight

“As Ange’s EP I’ve been delighted with the work that Ange has put into reducing Raffles weight and getting him as healthy as possible.  Weight issues are such a common issue, only the owner can address them, but they have such an impact on hoof health and the horse’s comfort.

If you want to take action about your horse’s weight here is a fantastic resource from the University of Liverpool and the Horse Trust.

And I’d urge you to take Ange’s advice about acting promptly and using as many tools as you can so you can quickly address the issue.”