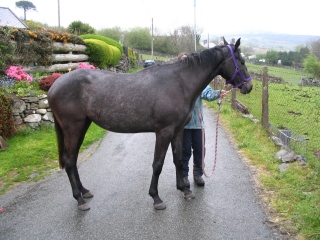 This young mare was left on full livery from being weaned until aged two. The original owner assumed that the livery yard was taking care of the feet, but it seems that they weren’t being trimmed regularly (if at all). When the original owner discovered the problem an EP was asked to look at the case. All four feet were in a very poor state, but the left fore in particular had a major deformity of the hoof capsule, with the hoof capsule shifted sideways. The EP was able to do an initial correction of the worst of the deformity on the left fore, but the mare’s feet desperately needed regular attention and careful management of her environment (e.g. keeping her off hard ground, control of infection, etc.)

After that initial setup trim, the mare unfortunately passed out of the EP’s care. She was not trimmed regularly and the advice given on managing her environment was not followed. The case wasn’t seen again until seven months later when the current owner bought her and asked the same EP to take her on. The original trim had had some positive effects in correcting the shift to the left fore hoof capsule, but the mare had in the meantime suffered three separate hoof abscesses between the front feet because she had been kept/worked on hard ground that such poor quality hooves just weren’t ready to take. It took 5 more months of regular trimming and careful management of the horse’s environment to fix the worst of the problems.

The original cause of the hoof deformity is not known, but there was no obvious reason why the hoof should have continued to be in a poor shape other than neglect. The mare is now fully sound and is being brought into work. The overall quality of the feet is improving steadily and the hooves are now at the stage that would be expected of a horse of this age and at this stage in training. There has been no further abscessing since the mare came back under the care of an EP.

The photos below show the left fore prior to the initial trim and after 5 months of EP care (12 months elapsed time in total):

“Her feet have improved spectacularly since being trimmed by an EP. She’s now sound on all surfaces and enjoys going for long walks on the local lanes and quarry tracks. She had serious issues with having her feet handled at first but my EP was always very patient with her and she’s now realised that having her feet trimmed isn’t so bad.”