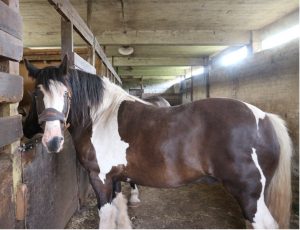 Horse: Traditional cob, 13 years old
History:
At the time of the EP’s visit in March 2020, the gelding had burst an abscess through the coronary band on the dorsal wall; it was still draining at that point. A vet was involved and aware and supplying pain medication when needed. At the following visit, the abscess exit was still open and draining. The EP strongly recommended for x-rays to be taken to investigate. 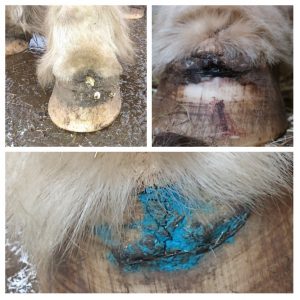 After x-raying, the gelding was hospitalised for a suspected keratoma; no keratoma was found but the affected section of the hoof wall was removed and the area debrided to clear the site of any remaining issues from the abscess. The gelding was fitted with a heartbar shoe to hold the hoof together. 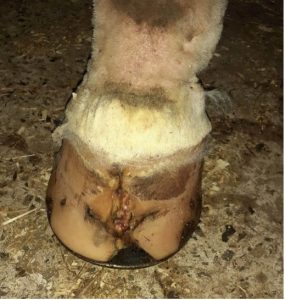 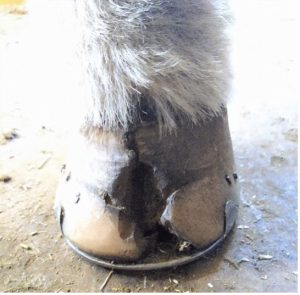 After several unsuccessful attempts to get a farrier out to reshoe, the gelding ripped the shoe off, removing most of the lateral wall alongside the shoe. The owner and EP decided at this point to undertake a barefoot recovery program. 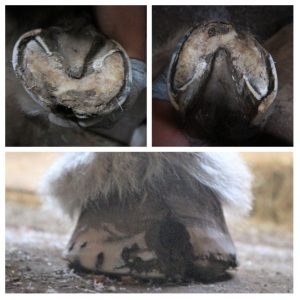 The toe was kept short and well bevelled to prevent any pull, while the owner ensured the injury site remained clean – due to the inability for this horse to be stabled (he jumped the stable door two days after his return from the hospital, so for safety reasons no further attempts at stabling were made), the horse was on turnout during this period. 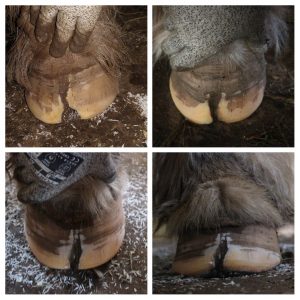 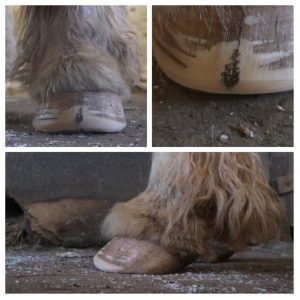 By April 2021, the wall had almost grown down and the gap that previously ran the full height of the dorsal wall was nothing but a surfacial blemish. One hairline cracks remained, though it is not clear yet if this may remain due to the length of time of the abscess tracking the area and the debridement.

There are several points that stand out on this recovery:
First of all how well a foot and the horse can cope with a large section of the external structure missing
Second that the strength of laminar attachment in the remaining areas of the foot ensured that the foot remained stable and that the attachment of an external structure (ie a shoe) to hold it all together wasn’t necessarily required
Third how important voluntary comfortable movement as well as mental well-being is for any recovery – this horse wasn’t stabled for the entirety of the process and remained active and living out in his herd